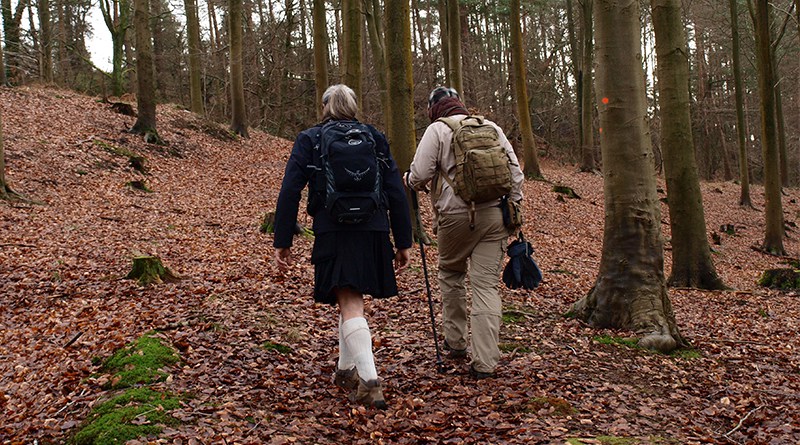 So, we've just completed our first weekend in the Forest of Dean, at a fabulous place called EarthHeart, just outside Brierley, which is owned and run by our lovely friend Jewels Wingfield.

We've been looking for a place to run our forthcoming men's weekends which had ample space for camping, some good wild land to explore and practice bushcraft, and somewhere which is simply beautiful to be in.

The purpose of the weekend was exploration and testing: finding out what facilities there were in the surrounding woodlands, doing some equipment tests, trying out our video and audio equipment, tools that we will be relying on during our events and also simply just to get away for a man’s weekend and get back into nature.  All boxes well and truly ticked.

We arrived on Friday evening, in the dark.  Thankfully the rain had held off and the wind was down, which made getting a fire alight and the tents up a doddle, so we had time to go and catch up with some of the volunteers at EarthHeart, have a brew and some food before turning in for the night.

The next morning we were up just before dawn to start some of our product tests, and how-to guides.

We started with a video test from Terry on a new spirit burner and stove – which was a joy to use (note it isn't a petrol burner, more on that later…) then moved on to a video test from Adrian on a new multi-fuel stove from Booster+1.  This was then followed by a video by Chris demonstrating how to light a camp-fire using flint and steel, something which is very useful in more extreme situations when firefighters and matches aren't available.

After a beautiful breakfast of coffee, singed sausages and beans cooked on our test stoves, we packed up camp and headed into the forest in the surrounding area, where we searched out suitable rocks for the stone-moving event we will be running in the summer, and adrian got in a product test on the Multi-tool shovel from Chafon.

We then explored deeper into the open countryside around Brierley, which gave Adrian a chance to put together a short instructional video on erecting a temporary tarp shelter, something that should be in everyone's kit bag when bad weather is in the mix.  We searched in vain for Boar in the area, found much evidence of their passing in the form of spoor and footprints, but no sight of the beasts themselves.  Terry had the opportunity to make notes for his blog on the Boar in the Forest of Dean, just a shame we couldn't get a picture to go with it.

Back to base with the fire re-lit, we had a quick supper from some Mountain House dehydrated ration packs, which were surprisingly tasty and filling.  Chris enjoyed the chicken korma, Terry the sweet-and-sour chicken and Adrian the Spaghetti Bolognese. Our wet weather gear provided amply able to handle the rain that came on that evening, as we sat around the campfire and reviewed the day’s proceedings.

The following morning we were up early to explore the pine forest to look for suitable places to practice bivouacking on our forthcoming men's weekend in April.  Breakfast was cooked by Adrian using his test Solo Camper spirit burner, in which he experimented with using petrol rather than ethanol.  The conversation went something like “Are you sure you can put petrol in a spirit burner?”, “Yes, petrol is a spirit, technically”… Turns out it isn't, technically, and so he wrote a blog on the experience.

We then broke camp, said our goodbyes to the team at EarthHeart and loaded up the wagon for our trip back to the south coast.

All in all a fabulous weekend, one of several test camps we will undertake before March, with plans to review many more useful camping tools, and record some more useful tips and tricks for the budding bushman!